I have known Clay Ellis for years.  Clay and his wife Michelle are what I miss most about living in Alberta.  Their hospitality, their generosity, their grace.  His work, somewhere in a zone of his own between painting, sculpture, and video, abstract and concrete, conceptual and figurative art, conjures up a sense of time and a spirit of place like little else I know.  We have had many drunken conversations about Picasso, country music and the meaning of it all over the years, and I look forward to many more.  He is one of Canada’s greatest living artists.  These are some shots from his most recent exhibition at the stunning new Art Gallery of Grande Prairie.

The text is from the gallery website.  The photographs were taken by Rob Ganzeveld. 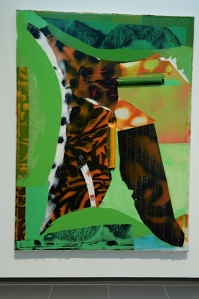 Born and raised on a ranch in Southern Alberta, Clay Ellis explores his connection with the landscape, referring to images, the temperament and gestures of his past.

“I think that the focus behind this exhibition is equal parts of reflecting on the experiences of growing up on the ranch, considering the reality of no longer being a part of it, and pondering what the land means to the individuals that currently live on the property.”

The transformation of the ranch itself, from homestead to ranching company, marked by the restructuring of out-buildings, the parceling of land, and the move towards automation, has happened in only a few generations.

For most operations, it is no longer necessary or practical to house a workforce, a shift that replaced hired hands and displaced extraneous family members. Usable tack turned to relic, and family members became guests to a property that had once been their home.

It is from the perspective of guest that Ellis makes his observations. While the works are informed by the changing perspectives of land use and ranching practices from one generation to the next, it has been his yearly visits over a 45 year period that have allowed him to see changes to the landscape that may escape those embedded in the rigors of the day to day.

Ellis neither condones nor prescribes ideology but rather suggests that to assess change we must first see it.

“Art has much more important things to do than change the world”–Clay Ellis, in one of those aforementioned conversations.