I was recently invited by the excellent Prague-based magazine Alienist (motto: ALL SUBJECTIVITY IS APPROPRIATION) to participate in this questionnaire.  The entire issue of the magazine can be downloaded here.  I have also posted my own brief contribution, which interrogates the notion of alienation, separately on academia.edu.

We live, we die. In a world beset by alienation, it seems we exist in a recurring dream of disillusionment. The history of reason – history as reason – poses itself at the beginning of the 21st century as a congenital madness. And if reason is the symptom of an irrational problem, what part does the mind play in this? Bloodless revolutions have stained the pages of psychiatry, literature, art history, philosophy – if emancipation is an idea that first belongs to those who forge chains, it is not a facetious question we pose: IS SCHIZOPHRENIA A SOLUTION?

One of my earliest attempts to formulate the argument of my Prague Trilogy was in a keynote lecture I wrote for the conference New Directions in Writing European History at the Middle Eastern Technical University, Ankara, Turkey, on October 25-6, 1994.  I was one of three keynote speakers, along with Paul Langford and John Hall.  My lecture was titled “Prague as a Vantage Point on Modern European History. ”

The conference proceedings, including the three keynote lectures, responses by Turkish scholars, and a transcript of audience questions and panel discussions, were published in English in METU Studies in Development, vol. 22, no. 3, 1995.

I am pleased to belatedly discover that my lecture, along with those of John Hall and Paul Langford, has appeared in Turkish translation in Huri Islamoglu (ed.), Neden Avrupa Tarihi (Istanbul: Iletisim Yayincilik, 2nd ed, 2014).  I like the cover too.

The title means “Why European history?”—a good question.   I began my contribution to the discussion of John Hall’s paper (which was titled “The Rise of the West”) as follows:

I found the presentation very compelling and I was suspicious precisely because of that.  It was the clarity, the simplicity, the elegance of it that came across so strongly, but I wonder can you do that when you are talking about 2000 years of European history and contrasting it with the rest of the world?  Can you compass that complexity within so simple an argumentative framework, within a single theory?  I want to try to pin you down by asking three simple questions …

The simple questions are: first, what is Europe?  Second, where is the West?  And third, when was modernity?

My 1986 book with David Frisby, Society, has coincidentally also just appeared in Turkish under the title Toplum.  The same publisher previously did a Turkish edition of The Violence of Abstraction.

Given the appalling repression going on in Turkish universities since the failed coup in 2016, it is heartening that such texts are still being published.

Blackwell issued a 2nd edition of The Great Arch in 1991, six years after the original publication, for which Philip Corrigan and I wrote a postscript discussing new work on English state formation published since 1985, and responding to various reviews of the book.  Both entailed some clarification and extension of its arguments. The 2nd edition had a very small print-run and soon went out of print, so this text is little known.

The excellent cover illustration is from Lyubov Popova’s set for The Earth in Turmoil (1923).  I have posted a downloadable scan of the postscript here for anyone interested.

Earlier this year New Perspectives published an updated version of a paper I had been working on—on and off—for more than a decade, in which I tried to re-examine some of the arguments about English state formation presentein my 1985 book with Philip Corrigan, The Great Arch, in light of my later work on Czech history in my Prague Trilogy.

Considering the differences between the superficial orderliness of the English/British table of royal succession and the apparent anarchy of its Bohemian counterpart, this essay questions aspects of the analysis of English state formation offered in Philip Corrigan and Derek Sayer’s 1985 study The Great Arch: English State Formation as Cultural Revolution. Rather than providing a contrast to England’s institutional political continuities over centuries, Bohemia’s manifestly fractured history furnishes a vantage point from which the ideological character of such claimed historical continuities becomes clear.  E. P. Thompson’s image of a “great arch” of state formation attributes far too much shape, solidity, and coherence to a process that was always, whether in England or Bohemia, a matter of flux and fluidity – a landscape in constant erosion, upon which coherence is only ever imposed in momentary retrospect.

New Perspectives has just made the text freely downloadable here.  I would welcome any comments.

For those interested, as promised I have now posted the afterword to the 2nd edition of Marx’s Method (1983) on academia.edu. 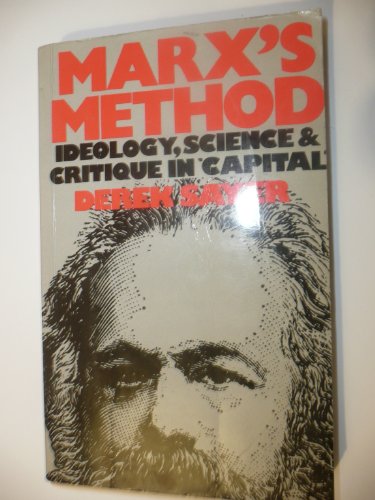 For those interested, I have just posted the full text of my first book, Marx’s Method: Ideology, Science and Critique in Capital (1st edition, 1979) on academia.edu.  As with other out-of-print books I have posted on the same site (The Violence of Abstraction, and Philip Corrigan and Derek Sayer, The Great Arch) it is selling for ridiculous prices second-hand.  All these texts can now be downloaded free of charge from academia.edu.

My 1987 book The Violence of Abstraction: The Analytic Foundations of Historical Materialism has long been out of print, and used copies are now listed on amazon at prices from £400 upward.

In the interests of open access, I have now made the entire text available (in three separate files) for free download at academia.edu

Philip Corrigan and I published The Great Arch in 1985.  It was an iconoclastic book, which met with decidedly mixed reviews.  The core of the argument, developed through a narrative of English history spanning the tenth to the early twentieth centuries, was this:

Moral regulation is coextensive with state formation, and state forms are always animated and legitimated by a particular moral ethos.   Centrally, state agencies seek to give unitary and unifying expression to what are in reality multifaceted and differential historical experiences of groups within society, denying their particularity.  The reality is that bourgeois society is systematically unequal, it is structured along lines of class, gender, ethnicity, age, religion, occupation, locality.  States act to erase the recognition and expression of these differences through what should properly be conceived of as a double disruption.

On the one hand, state formation is a totalizing project, representing people as members of a particular community—an “illusory community,” as Marx described it.  This community is epitomized as the nation, which claims people’s primary social identification and loyalty (and to which, as is most graphically illustrated in wartime, all other ties are subordinated).  Nationality, conversely, allows categorization of “others”—within as well as without (consider the House Un-American Activities Committee during the McCarthyite era in the United States, or Margaret Thatcher’s identification in 1984 of striking miners as “the enemy within”)—as “alien.”  This is a hugely powerful repertoire and rhetoric of rule.  On the other hand, as Foucault has observed, state formation equally (and no less powerfully) individualizes people in quite definite and specific ways.  We are registered within the state community as citizens, voters, taxpayers, ratepayers, jurors, parents, consumers, homeowners—individuals.  In both aspects of this representation alternative modes of collective and individual identification (and comprehension), and the  social, political and personal practices they could sustain, are denied legitimacy.  One thing we hope to show in this book is the immense material weight given to such cultural forms by the very routines and rituals of state.   They are embodied in the former and broadcast in the latter, made to appear as—to quote Herbert Butterfield on the Whig interpretation of history—”part of the landscape of English life, like our country lanes or our November mists or our historic inns.”

While I would now (of course) no longer endorse all of the historical specifics of the analysis Philip and I presented the best part of thirty years ago, I see little to quarrel with in this as a starting-point for demystifying “the state” and what is done to people under its auspices and in its name.  The omission of different sexualities as a key axis of structured inequality, maybe.  But anybody interested in where I would nowadays want to qualify the (overly) grand narrative of English history offered in The Great Arch might want to look here.

For good or ill, The Great Arch has had considerable influence on thinking about “the state” across humanities and social science disciplines over the last three decades.  Though Blackwell issued a (very small print-run) second edition in 1991, the book has long been out of print and copies sell for ridiculous prices secondhand (one is listed today on amazon.co.uk for £336.64).  Since the rights have now reverted to the authors, I decided to put it up on academia.edu, where it can be legally downloaded free.  The text is that of the first (1985) edition.

New Turkish translation of old book (The Violence of Abstraction).  Love the cover: Marx in a beer can!